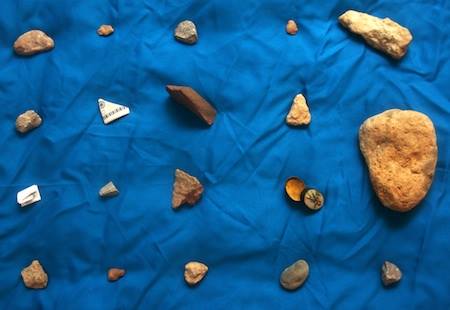 „We seek not our origins but a way of figuring out what we are from what we are no longer.“ – Pierre Nora

Two sets of remains of household items, the sort which could be found in the debris of a demolished home(s).Some of these items date back 70 years while others seem to belong to more recent times. These fragments represent sites of destruction and bereavement, of lives lived and ended by force. The individual exercise of collecting and documenting this material by Sonya Schönberger (Berlin) and Fazal Rizvi (Karachi) stems from diverse approaches. Schönberger’s investigation leads her to excavate historical narratives through oral histories and objects, filling the gaps in inherent history to complete the present narrative. Rizvi on the other hand is engaged in an act of resistance where preserving fragments and documenting the changes in these sites becomes a protest against these erasures, caused by urban regeneration.

For Schönberger, this exhibition marks the conclusion of a three year long intensive research. Initiated with detailed interviews and collecting of shards of objects resurfacing from the soil, concludes the series by looking up at the sky, documenting the trees which were planted in the sixties to create a new veneer to conceal the scars of the past. It seems as if Schönberger has found her closure where she accepts the new façade which is cognizant of the memories yet succumbs to life. An Agfa box dating back to the sixties has been used to capture the trees and sky. It seems to stem from an urge of stepping back in time, into the moment of desolation and being able to foresee life in the future. Another formal aspect which aids this desire is the use of expired film, resulting in varied colors, suggesting distinct futures. The few photographs displayed in the show are part of a larger photographic series.

Rizvi’s oeuvre is an ongoing exploration which spreads over multiple sites in Karachi, drawing a connection between land and sea. The act of preserving the changes converts the fading present in to a vestige of the past. The formal aspects adopted by the artist become a commentary in themselves. The attempt at reclamation, containing the uncontainable (sea) has been documented through typewriter (a relic of the past in itself) drawings on off white sheets of paper with rigid and lone characters used to confine the fluidity of an infinite wave. The sharp images with a vibrant blue background documenting the objects found in the division of the mountain specify the immediacy of the event. The narrative texts woven around the poetic qualities inherent in the vernacular, address the reader directly. By doing so Rizvi shrinks the proximity between the reader (spectator) and the narrative and transforms her/his role to that of a stakeholder.
Hajra Haider Karrar.